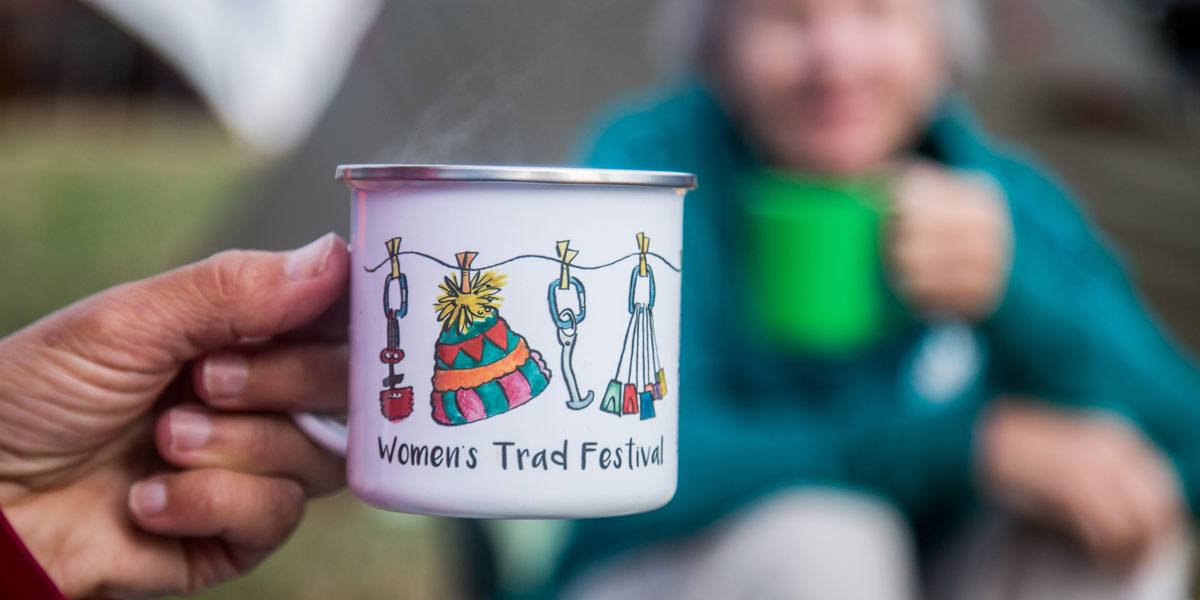 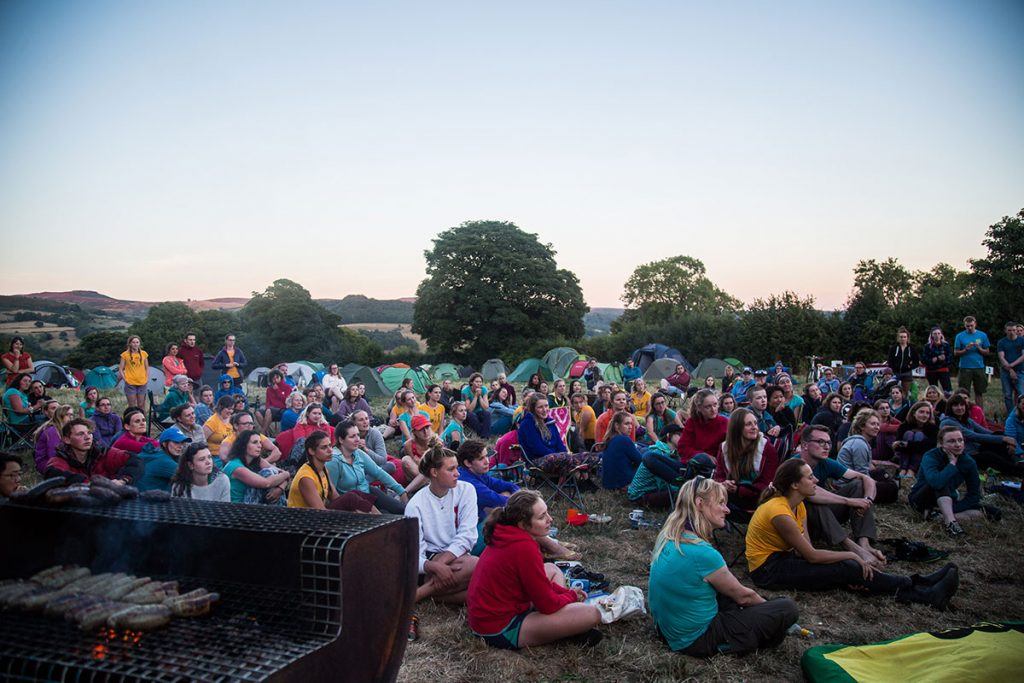 It certainly looked bigger, brighter and more colourful than ever, with the prospect of 200 climbers all gathering in a grassy field just below the dark cliffs of Stanage. Parking up, a core volunteer clad in an orangey red t-shirt beckoned me into a parking spot on the hill.  The pressure to deliver as an official  ‘leader’ was now officially on.
After submitting my application earlier in the year, I was honoured to be accepted and decided to buddy up with other turquoise blue-t-shirt clad leaders, Hazel Jones from the Pinnacle Club and Laura Kirkwood , an Edinburgh based climber,  Women’s Trad Festival attendee  and climbing partner back in 2016. 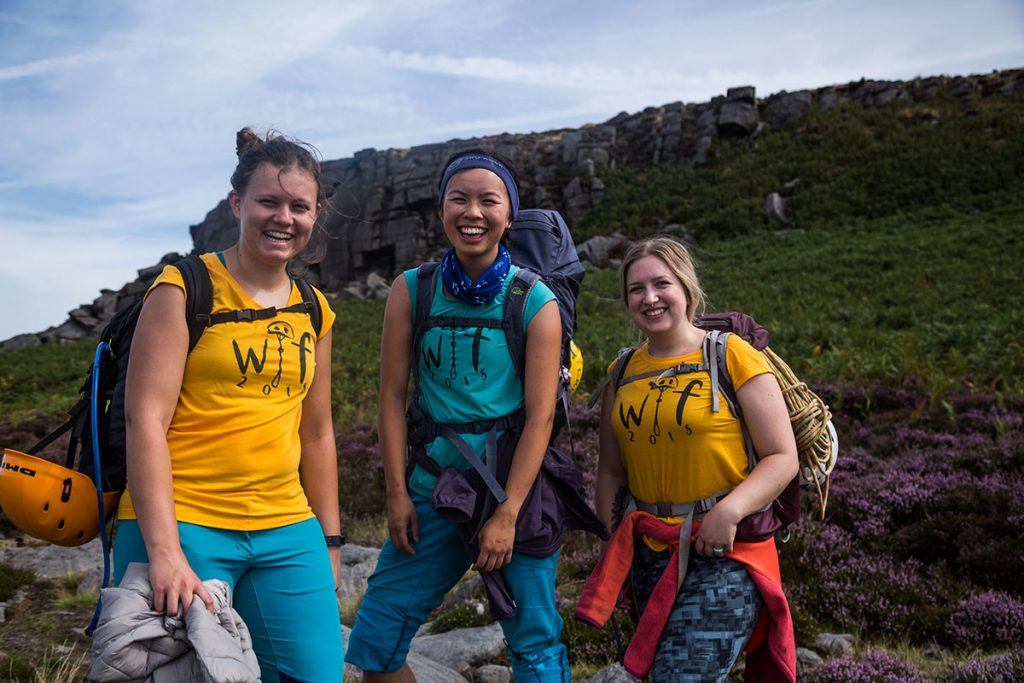 Friday night saw the campsite busy with activity, a sea of colourful tents erected  and an excited chatter amongst the keen Friday night attendees. After registering their attendence, people wandered around the branded stands under a ‘Great British Bake Off’  esque  Rab tent, eyeing up the shiny DMM gear, the sticky rubber on the Tenaya shoes and watched in awe as a sewing machine operated by bike power took centre stage by the Scavenger table. More importantly, the atmosphere was one of anticipation as climbers chatted to one another, many of whom had travelled up by themselves or in small groups together.
There was an organised recycling station. There was a real pizza oven. There was  even multipacks of loo roll , a rare sight at an actual festival. Heck, there was even bright rainbow windmills and hand-painted signs stationed around the campsite for climbers to meet their learners on the Saturday morning. There was a risk assessment and contacts spreadsheet the size of a car bonnet being waved around the registration table.
It was clear to see the huge amount of organisation and logistics that had gone into managing a festival with over 200 climbers, additional volunteers, helpers, brand ambassadors and partners all supporting each other. 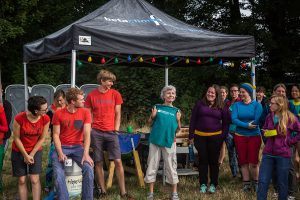 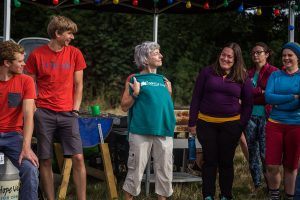 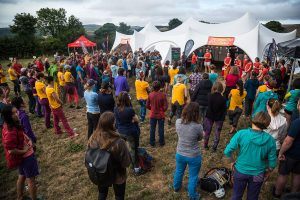 Saturday morning  kicked off with an introductory speech by Gilly McArthur from DMM, before leaders attended a safety briefing run by Cath Wilson. The emphasis was on safety first, and teaching best practice – as leaders, it was our call on whether we were happy for our learners to climb on lead, second , top rope a route or just to encourage our learners to get out and learn.
Armed with nearly 250m of rope between three climbing parties, we took our keen and enthusiastic climbers on the uphill walk in to Crow Chin, Stanage North and went through various gear placements, racking on a harness, lead belaying and basic anchors.
The experience of the women we were climbing with was hugely varied- women in their 20s and early 30s with little to no experience climbing outdoors on gritstone. We spent most of the first day introducing them to seconding routes, and encouraged them to try a ‘ghost’ lead with an added Top Rope for safety. 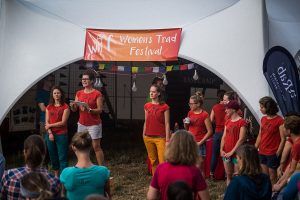 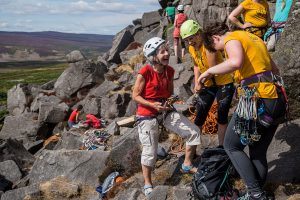 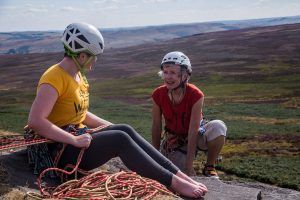 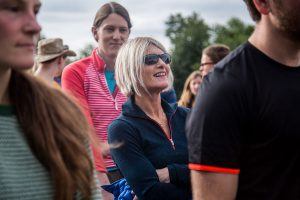 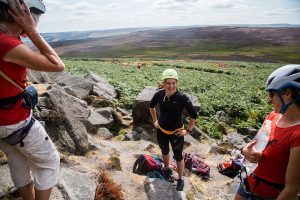 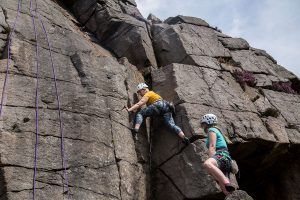 The emphasis was never to push our climbers past what they wanted to achieve. For us, it was eye opening to take it back to basics and talk about things we often take for granted. Who carries the gear to the crag? Basic Crag etiquette? Where should your quickdraws be on your harness?
I saw the huge steps being made in the learning process from the learner climbers, taking in the many layers of teaching. We set up a top rope and ghost lead on ‘Bent Crack’, a V Diff route which is the perfect rack suited for hex placements galore.By the end of the day, the rumble of hungry stomachs, the empty hiss of our water bottles  and the sun’s warm rays lighting up Stanage meant it was probably time to head back to campsite. 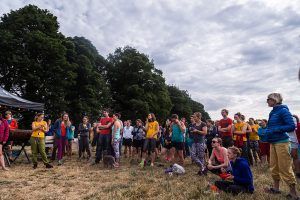 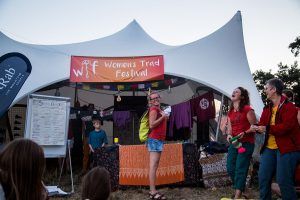 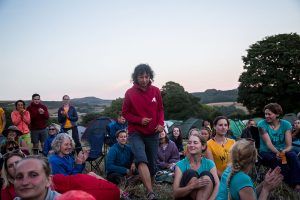 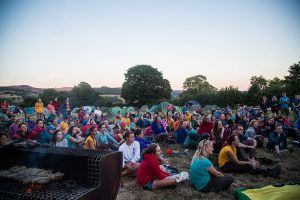 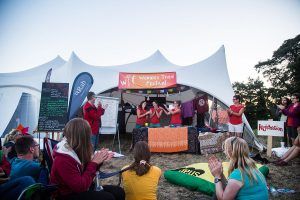 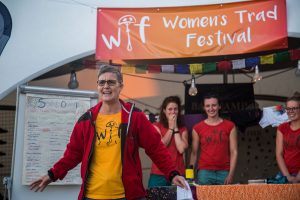 Evening entertainment revolved around a plentiful BBQ, a raffle and a memorable speech by newly elected BMC president Lynn Robinson. Lynn mentioned PC member Gwen Moffat congratulating her on her being elected as president, and mentioned  how proud and emotional she was to receive the email! The evening revolved around chatting by the fireside , keeping a watchful eye over the pesky embers and catching up friends new and old.
On the second day, myself and Laura went to Bamford and we found some easy mods to encourage good gear placement and talk through positioning, go through belays and gear again. The day culminated in some exciting seconds for Zena, who followed me up a climb called ‘ Vertigo’  and the balancey ‘Bosun’s Slab’ whilst Abi got her first lead on ‘Hyperteneuse’ with the watchful eye of the Women’s Trad Festival mentors dropping by to oversee and feedback on her gear placements. 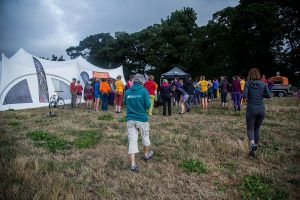 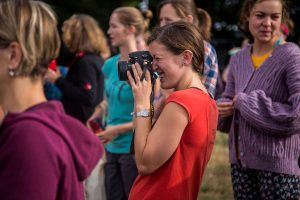 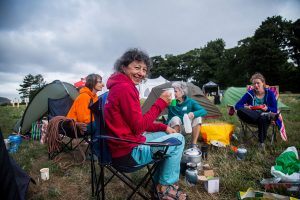 Women’s Trad Festival is a hugely important event to promote awareness and visibility of clubs such as Pinnacle Club to a whole generation of climbers (both male and female) that shows how welcoming and accessible it can be. I certainly met several very competent climbers  and leaders who we’ll probably be seeing at an intro meet soon!

Words and Photos by @jessielphoto 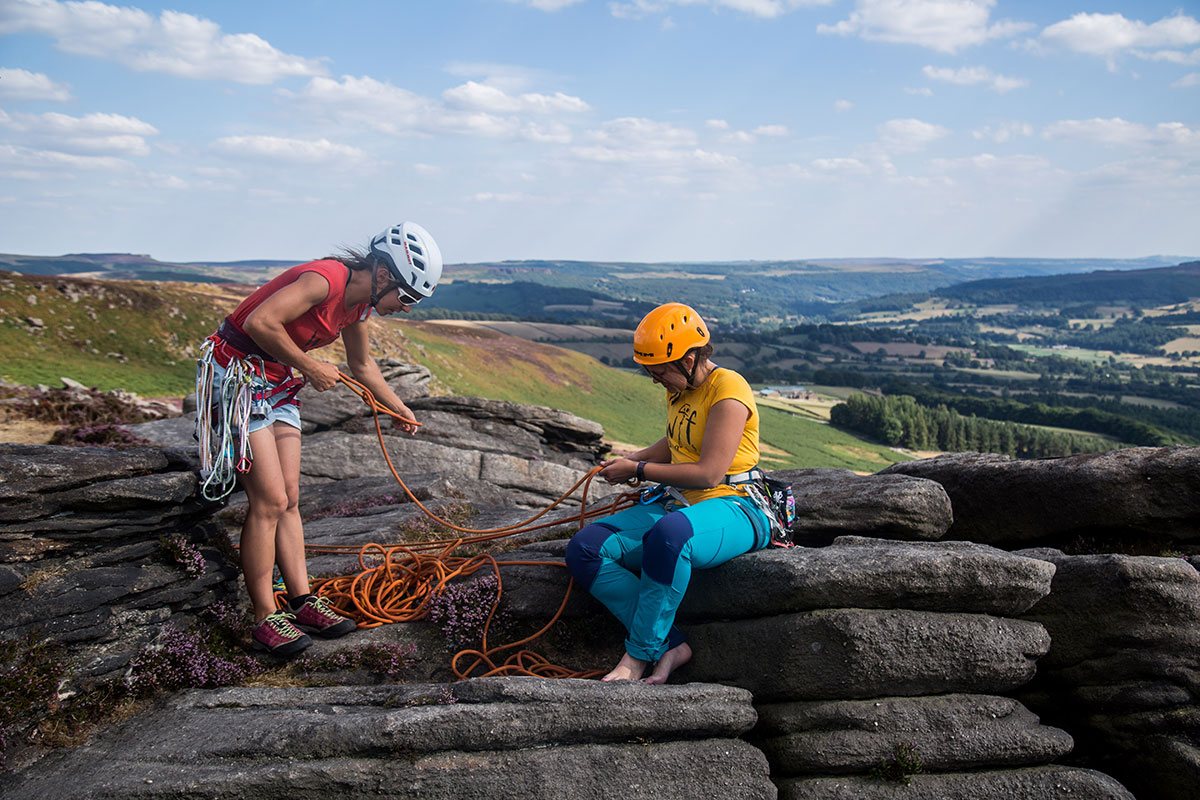