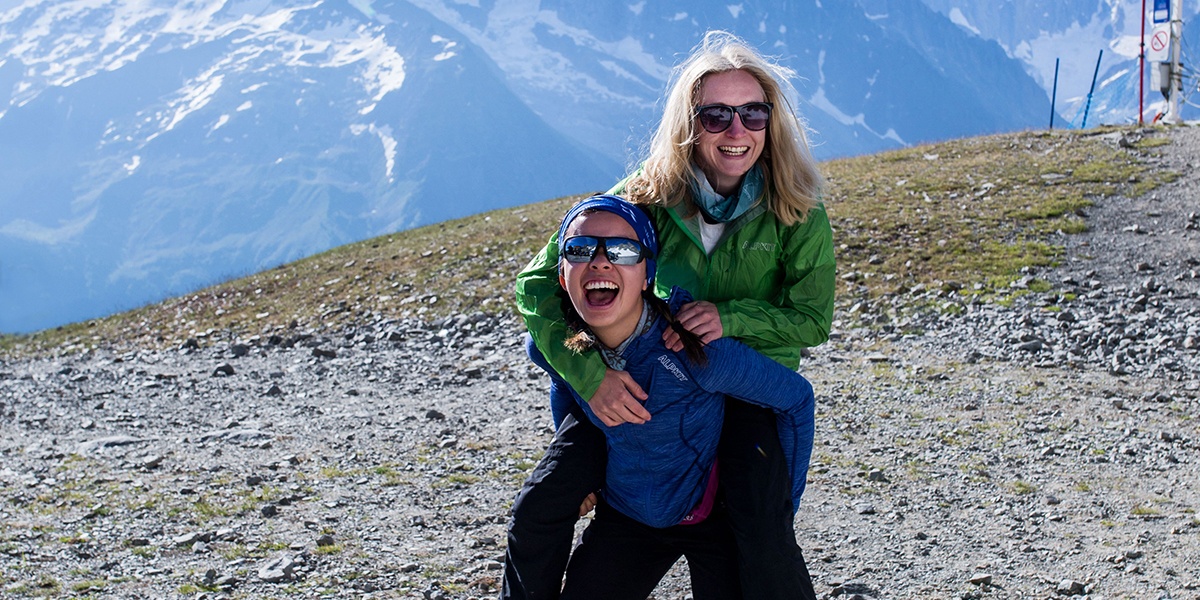 Question: What do you get when you have mix a group of friends, a couple of 3,000m mountains, an alpine tick-list and many, many early morning starts?

Disclaimer: I was approached by @EatTrek who very kindly gave me two boxes of their latest bars Cocoa Raisin for this trip which were much needed on some of the longer routes of the trip… including one unplanned and one planned bivvi!

As a photographer, climber and aspiring alpinist, I was asked to compile a diary about my experience in the Alps below. 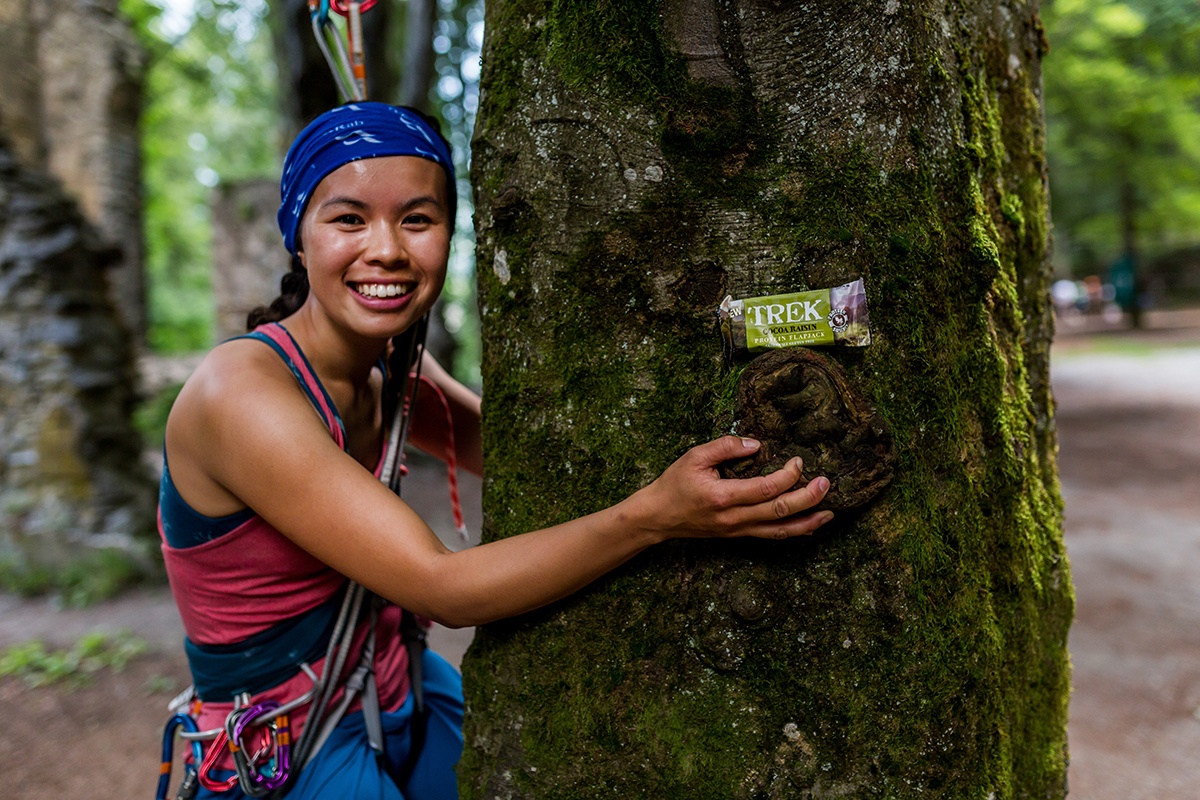 Having arrived the night before, we decided to practice our alpine skills in the less high altitude location of Les Gaillands, a sport climbing crag and leisurely place for a picnic just outside of Chamonix, much to the curiosity of the locals…

After wrapping our heads round the rope work and practising the rescues over and over, we counted down the hours until our first big alpine day… 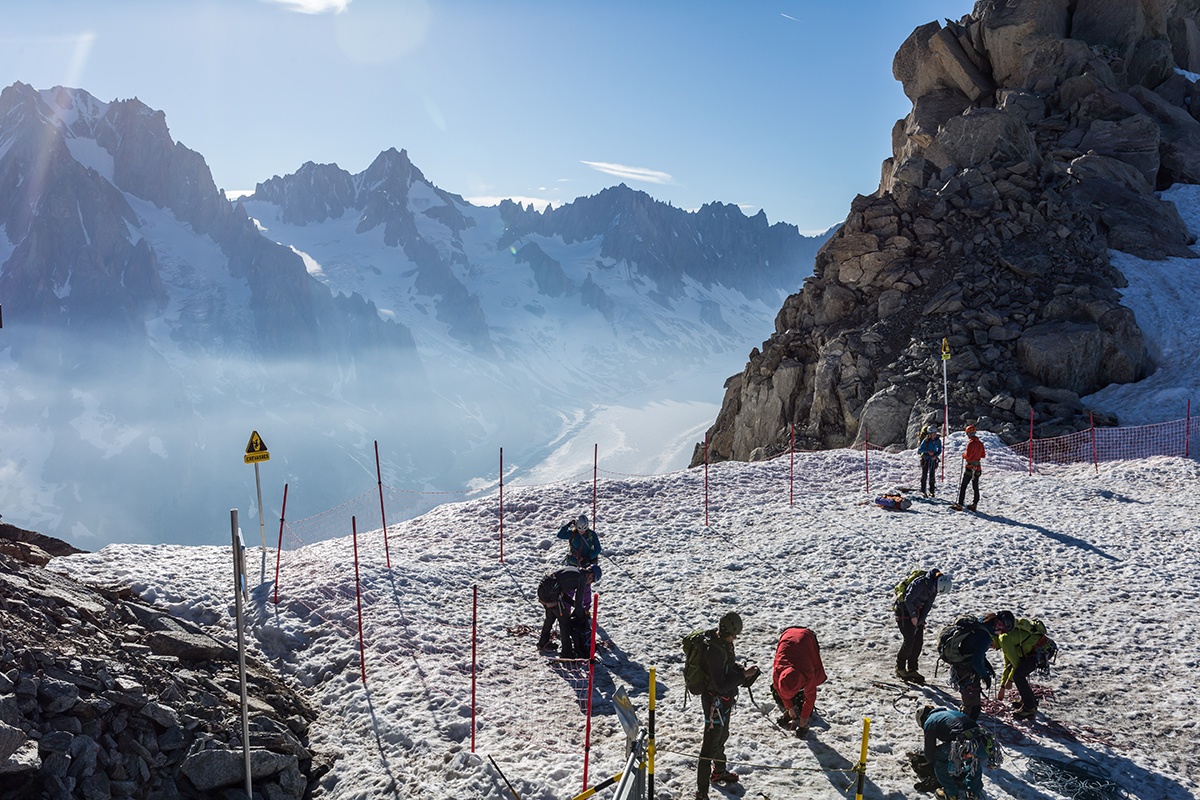 Day Two (and a half) of our Alpine adventure: a slightly Scottish-Esque, birthday epic…

5.30am, and the alarm went off, signalling time to get a move on for our early bus connection to Argentiere.

We got the first lift up to Grand Montets lift to the station at a dizzying height 3,300m, before heading towards the snowy glacier to reach the North West Integral Ridge.
Chossy, exposed views complimented by huge hand holds but never feeling too ballsy, we moved together along the AD mixed route, climbing in crampons and near empty rucksacks, before joining onto the busy and congested North West ridge for the summit of Petite Aiguille Verte, 3512m.
What we didn’t quite expect was the huge numbers of climbing parties all getting to the summit at the same time… and our summit descent involving two abseils with the clouds billowing up the valley and closing in on the summit.

One 45m abseil to the demi lune and one 40m abseil over the bergschrund took much longer behind many ques of climbers. We descended safely, using double ropes to abseil off, shared lines with other climbers and ropes up to made it safely over the glacier after missing the last cable car, which left 45mins earlier…

We celebrated a spontaneous night of emergency bivvying & birthday celebrations at the lift station, pooling food together, nibbling on @eattrek bars and sharing chocolate and tea with strangers.

It might not be the comfiest night ever spent on the floor (of a loo), but it definitely makes you appreciate just how comfy a real bed can be… 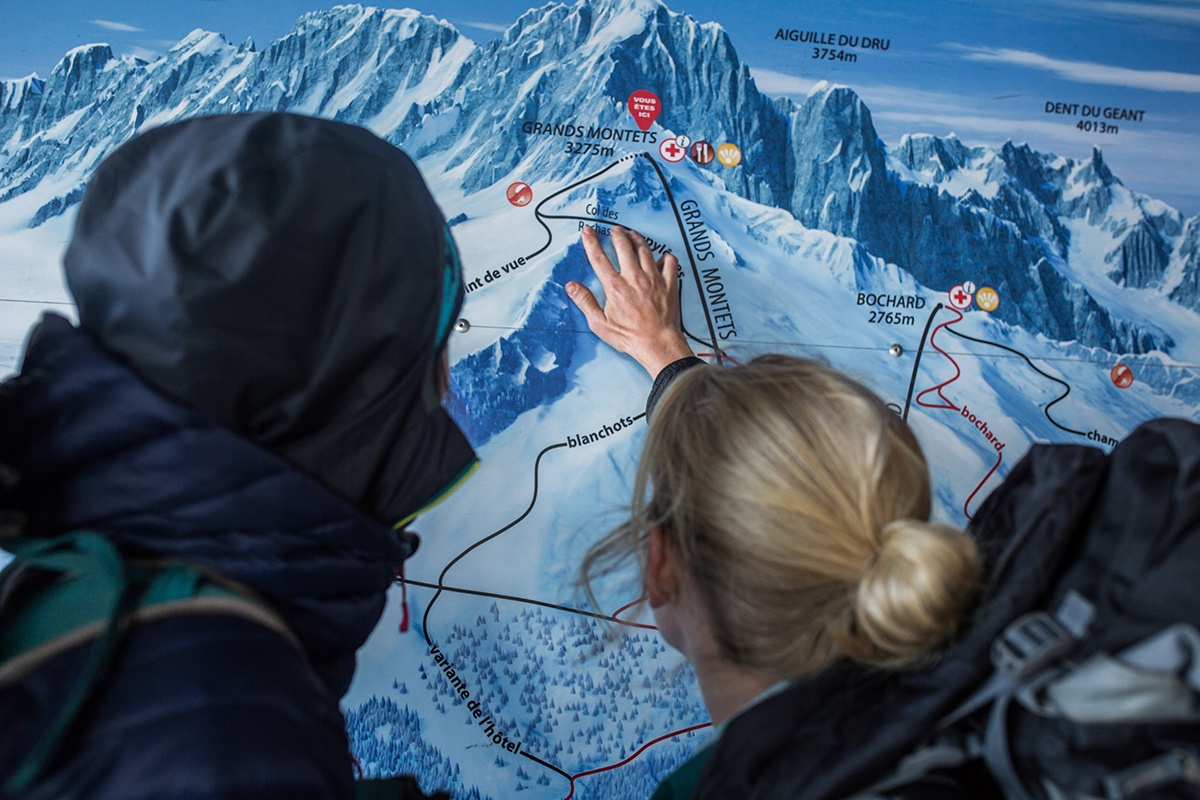 Day Three: How to master the art of looking cool walking back into Chamonix…

Woke up after the ‘accidental’ bivvi after a restless night sleeping on the floor in the clothes we were wearing and drinking the last dregs of water from the day before… We watched the sunrise over Mont Blanc, Argentiere Glacier and Petit Dru, as the mountainscape changed in the dawn light.
After making it down the first lift tired, hungry and cold, we dropped a van off for two climbers who were doing a linear route in town, before walking into the nearest cage and eating a gargantuan breakfast, a cheeky little nap and chilled afternoon by Les Gaillands.

Birthday celebrations planned for the evening before naturally meant we had to celebrate in Chamonix! 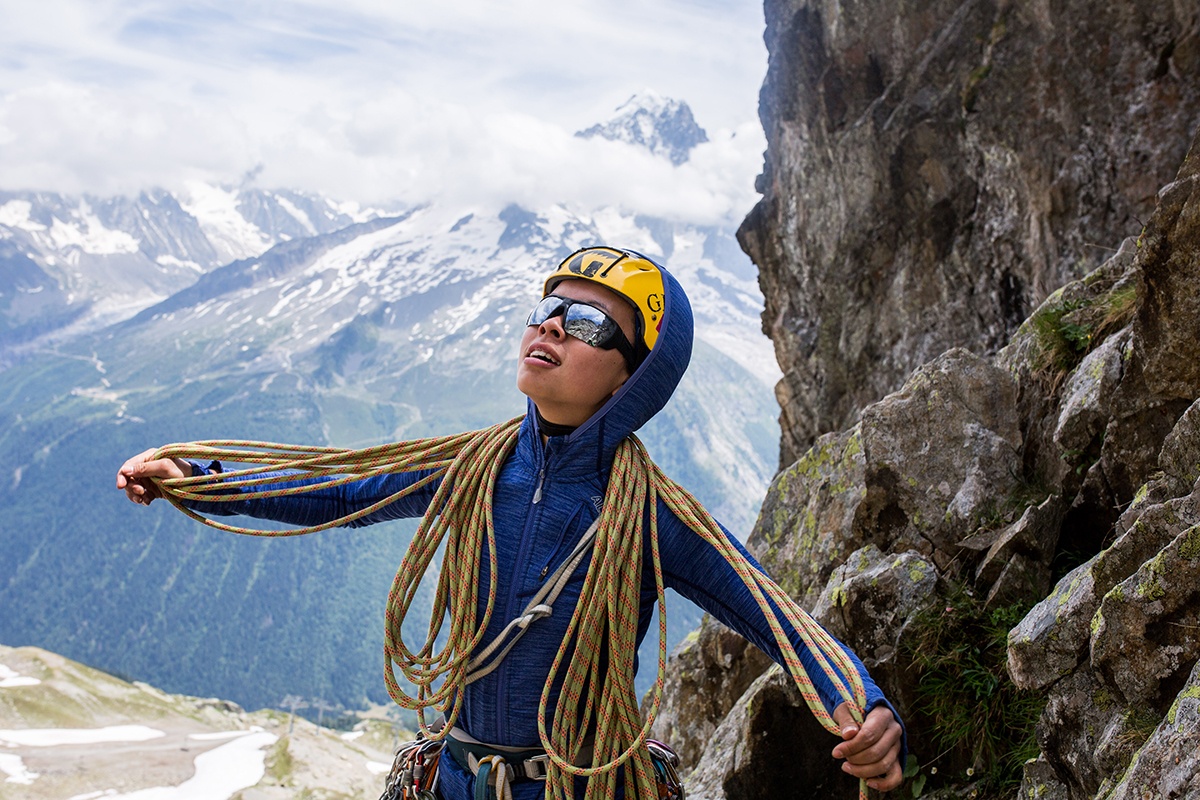 Holds, holds and more holds! Incredible Grade III / V Diff style climbing on the Index with a 75m abseil at the top.
For the first time I felt super comfortable in an alpine environment, placing gear, climbing in rock shoes, scrambling start and views of alpine meadows in the sunshine whilst we watched clouds gather round the Mont Blanc Massif.

A short snack stop at the top of the summit with @eattrek bar before we abseiled off the top and back down to the lift with plenty of time to spare. 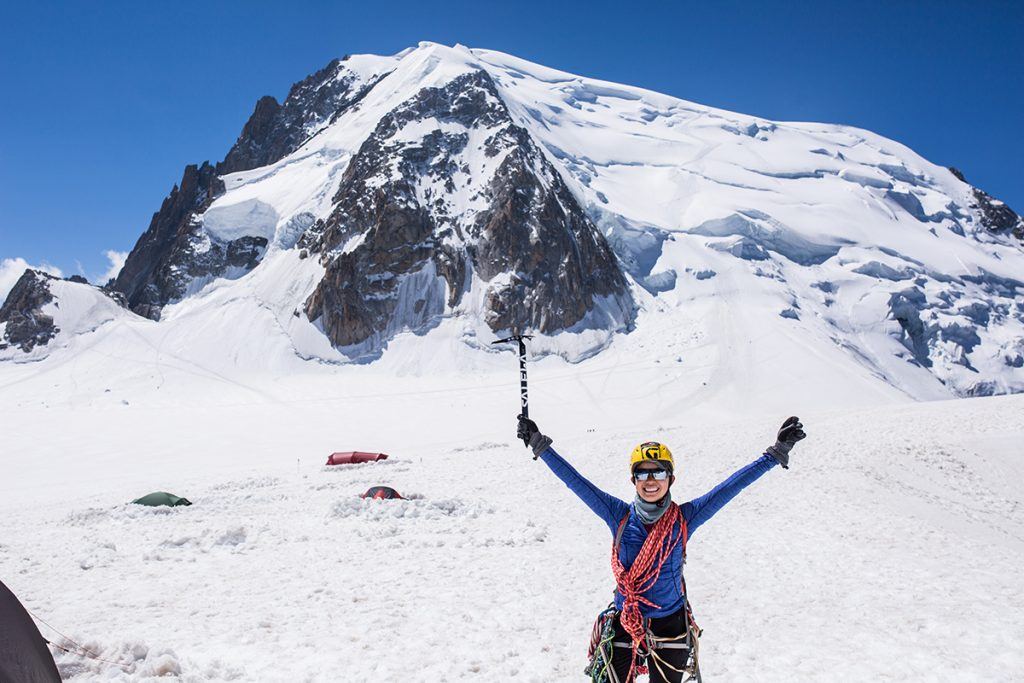 Originally we had planned on completing the full traverse but after seeing giant seracs rolling down Mont Blanc Du Tacul, we decided to bail off doing the final summit and abseil back down, using a bomber spike with sling and maillon to get us off the route safely along with two other climbing groups.

We placed an ice screw or two for a tricky icy traverse on a 40-degree slope and crossed back over Vallée Blanche back to the Aiguille du Midi, 3842m.

We may not have finished our route the way we expected but back at the lift station where one passer-by asked us who was guiding us and to their we told them it was us leading our own alpine routes. 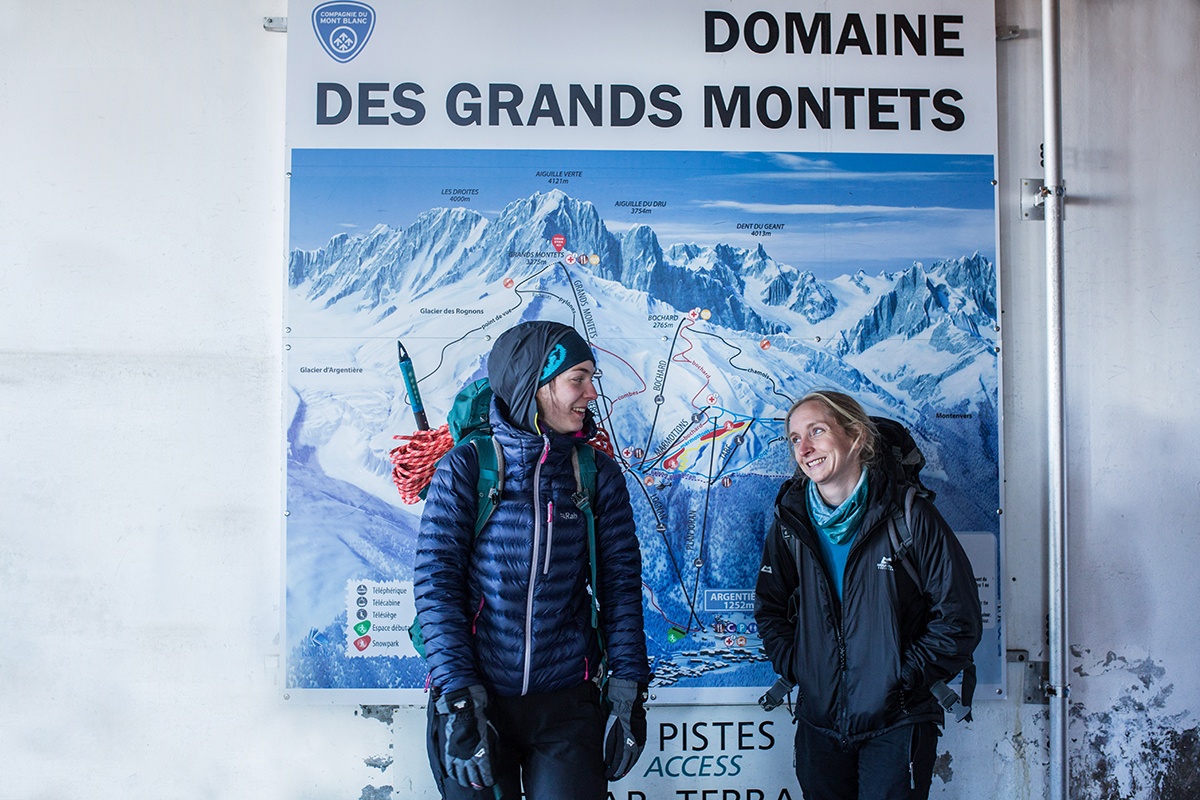 The friends who share a rope, a ring of fire, a @eattrek bar and a belay stance (and completely understand when nature calls and you need a mountain wee on route.)

It’s been pretty awesome to climb in an alpine environment with your friends, and even better when you make it safely off the mountains/crag and celebrate with a sporadic night out (or three…) in Chamonix. 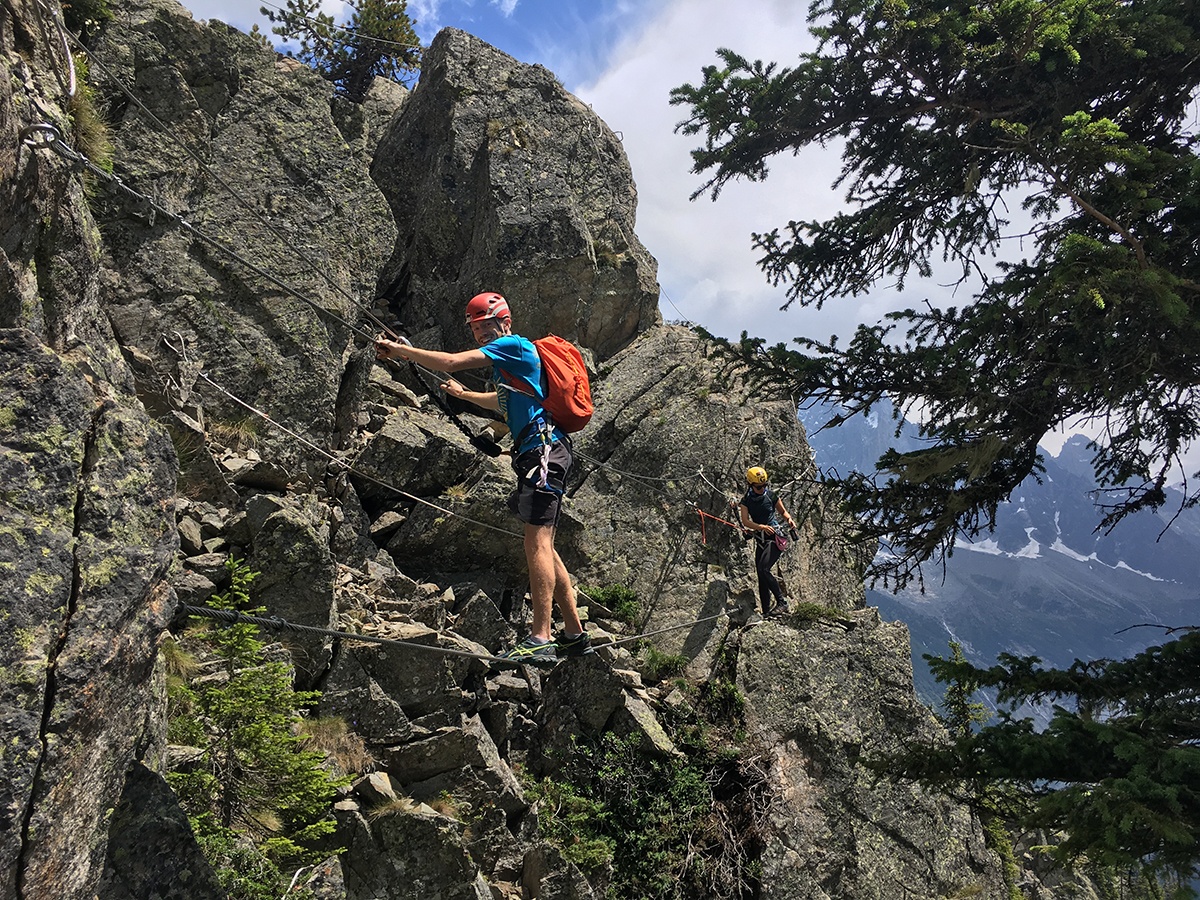 Day Seven: Dangling on a Via Ferrata…

Tired… groggy…and a slow Sunday start meant despite the weather being sunny an alpine route was it of the question. Instead we looked at Via des Evettes, an awesome little Via Ferrata near the Flegére lift, which has options to continue up the ridge to Via Corda de Janvier. Highlight has to be the 50m wire bridge to finish… 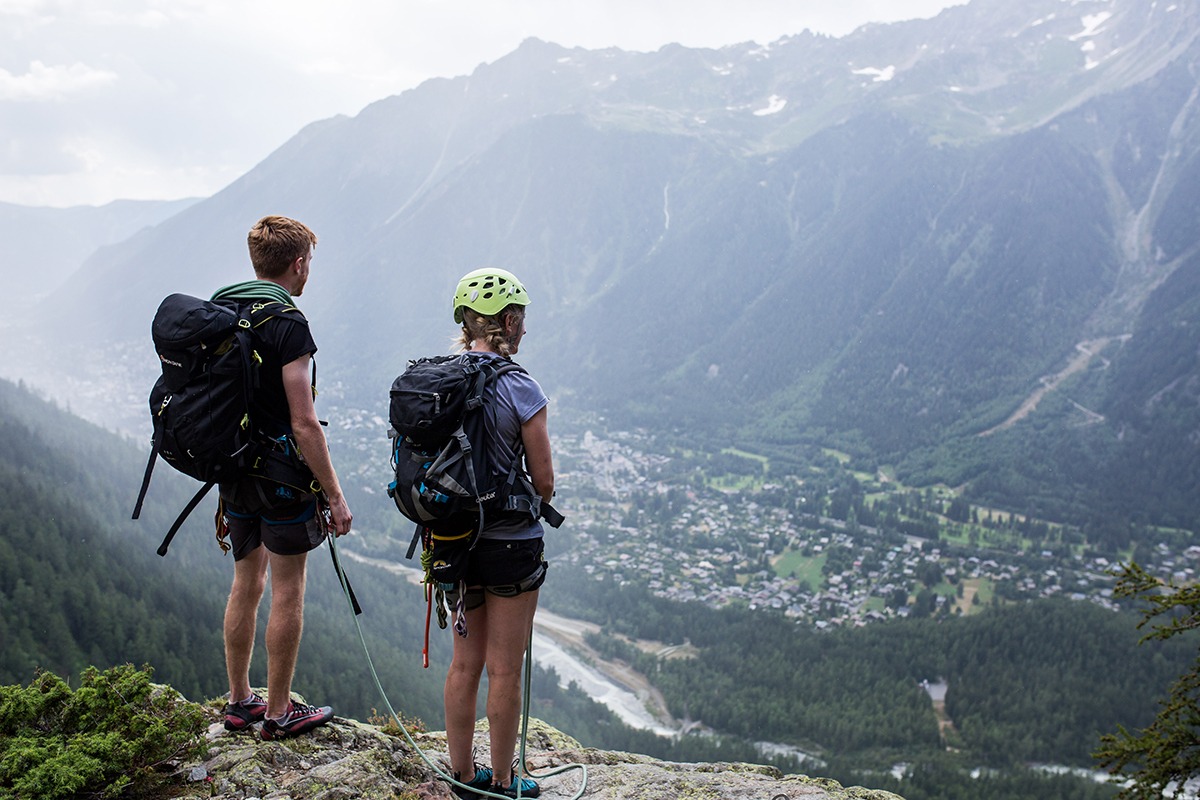 So far, my favourite view of the Alps has been the top of the multi pitch, which finishes at the mouth of Mer De Glacé. It’s the neck-craning, intimidating and most intense peak of all, Le Dru… 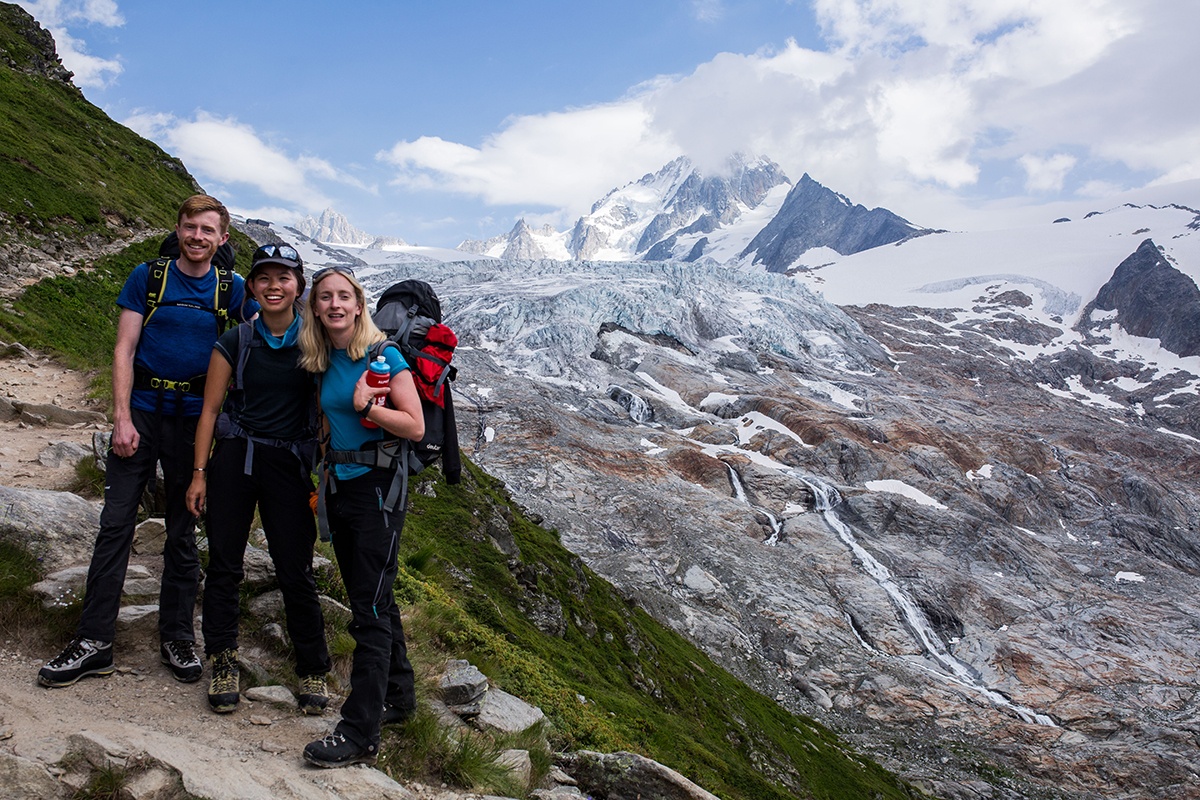 Last night was late night packing, checking over kit and getting some much needed rest.
To max out our lift pass usage( because we’re tight Brits after all) we headed up to Brévent (2,525m) and Plan Praz (2,000m) and gawped at the climbers teetering up the steep faces, before whizzing back down into the Valley for last minute supplies for our two day route. We whizzed back up Charamillon and Autannes chair lift up Le Tour and made it with good time to Albert Premier hut.

Can’t believe how nice it is to sit and appreciate the non slushy walk in, spending an awesome evening at one of the best alpine bivvi spots whilst watching the clouds part and see the mountains turn a deep indigo hue.

Looking forward to our mountain bivouac tonight with an @EatTrek bar for pudding! 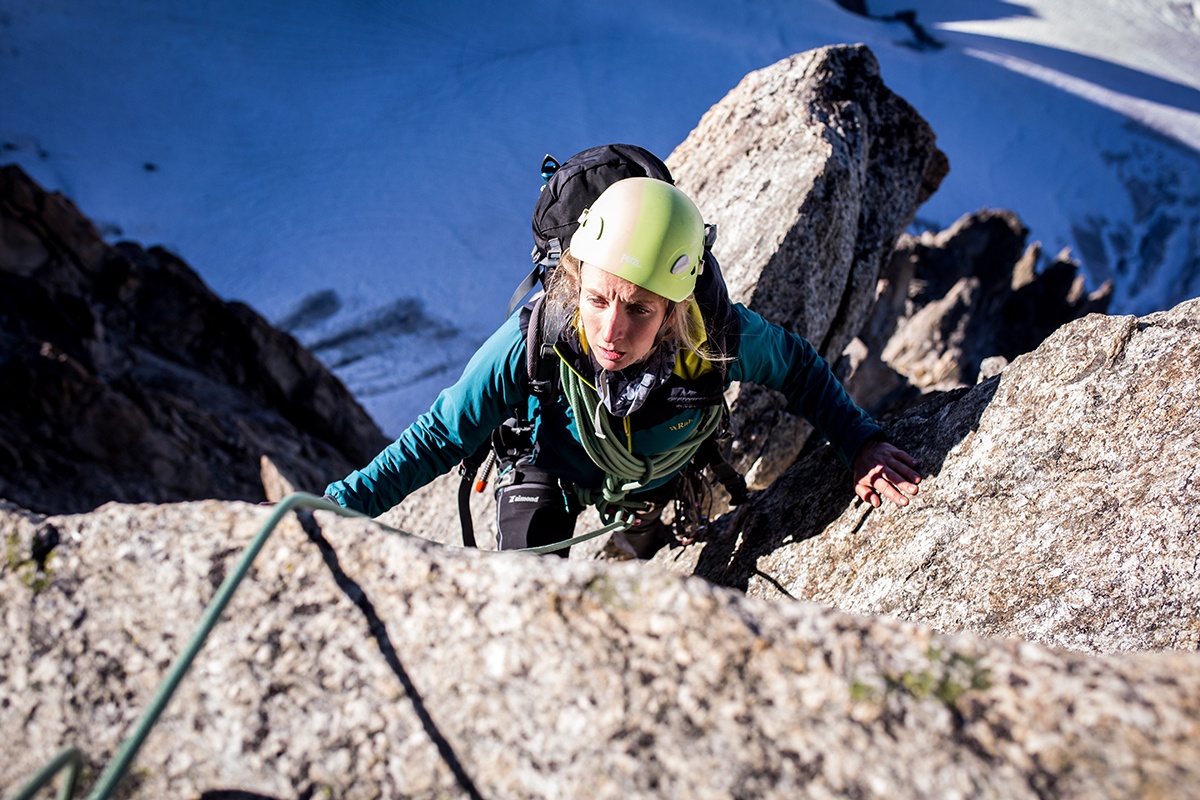 Day Ten: Alpine Dreamin’
Wiggling our toes in our sleeping bags, the view first thing was the inky night sky as first light creeped along the horizon.

The final alpine route involved setting alarms for a 3.30am start. We bivvied in the most alpine accommodation available, complete with a dry stone wall enclosure and little rocky seating areas to sip a steaming pot of coffee as we watched dawn break.

The route was pretty intense – partially up the calf burning, icy Table Couloir in pursuit of the rocky, chossy start of Arête de Table. Dreaming only of the iconic spires and yellow towers of rock, we moved quickly, taking care not to dislodge the rock scurrying underneath our boots.

We approached the crux pensively- a huge rocky table, a ‘thuggish’ (i.e. grim) 5a move onto a gigantic balancing rock. The route has taken us past stomach churning amounts of exposure on a knife-edge ridge.
Climbing at altitude is knackering physically and mentally, cold as you tiptoe in the Northeast face catching the sun in between pinnacles. There are also no chalk bags in sight… We made it back down the lift, walking triumphantly through Chamonix armed with a ‘Steak Frites Fromage’  back in time (just) for the airport transfer… 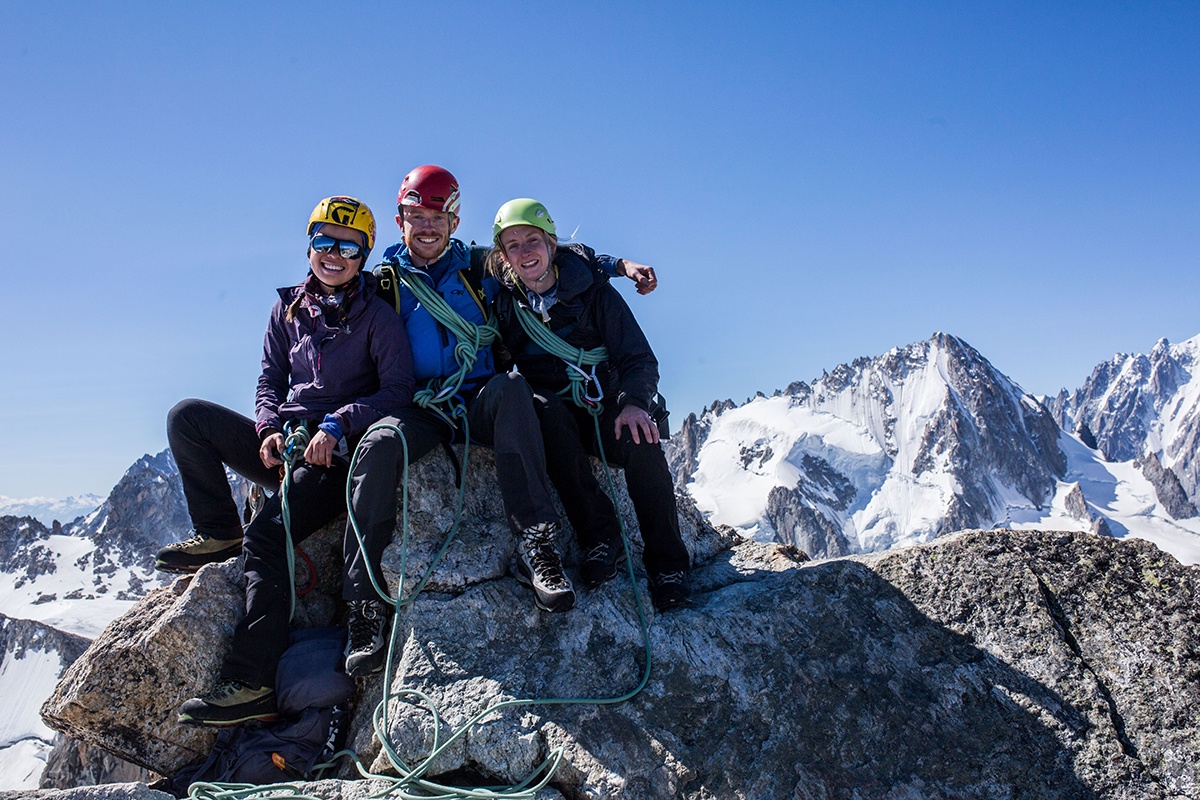